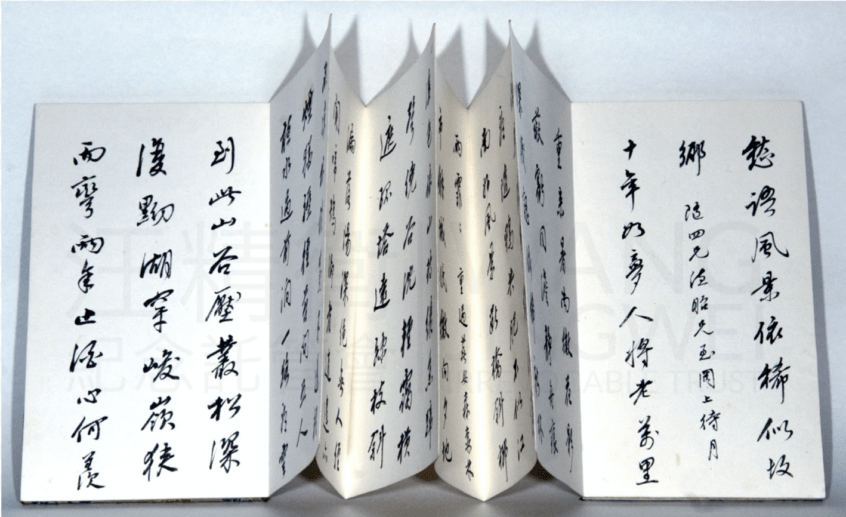 Zeng Zhongming (1896-1939) wrote this poetry collection as a gift to Ho Mang Hang’s mother, Li Lingshuang. The resemblance of Zeng’s calligraphy to Wang Jingwei’s is evident.

Zeng Zhongming was the younger brother of Zeng Xing (1882-1954) and the husband of Fang Junbi (1898-1986). To Zeng, Wang Jingwei was more than a close friend, he was also Zeng’s mentor and teacher. In addition to Chinese literature and history, Wang taught Zeng the art of calligraphy and how to write poetry. In 1966, Fang Junbi compiled her own compositions together with Zeng’s works and published the Poetry Collection of the Pavilion of Marital Harmony.

When Wang Jingwei and his wife Chen Bijun travelled from China to France in 1912 to study, Zeng Zhongming and Fang Junbi accompanied them. They lived together as an extended family in Montargis. Zeng also took up the responsibility to care for the children in the household. Fang described their life together in detail in a February 15, 1962 letter to Ho Mang Hang (1916-2016) and his wife Wang Wenxing (1914-2015) (See Wang Jingwei & Modern China on pages 441-464):

Mr. Wang himself taught us Chinese, always including some poetry. The fact that we have a foundation in Chinese studies is completely because of him.FANG JUNBI

After Zeng returned to China, he became Wang’s chief private secretary, with a range of responsibilities, including Wang’s finances, a role in which he would serve for the rest of his life. From this point forward, Zeng became Wang’s closest associate. Both dedicated to the national affairs, the two men shared political ideals and attitudes. In a number of poems, Zeng described memories of home and the time the group spent together.

On March 20, 1939 in an assassination attempt on Wang Jingwei happened in Hanoi, Zeng Zhongming was shot and passed away the following day.