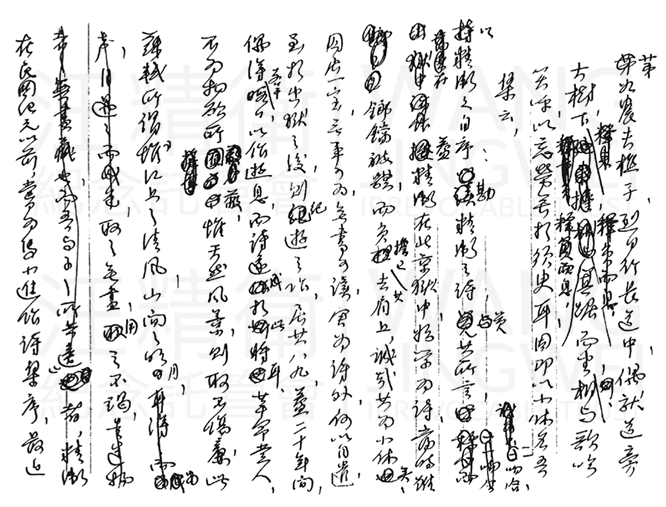 In the handwritten draft of his autobiography, Wang Jingwei described how he endured prison life by writing poetry, which was later collected in Shuangzhaolou shicigao. Wang Jingwei Nanshe Poetry (page 76)

The Book of Odes says: “The common people have toiled long and may well be allowed a little rest.” How true this is. To work and toil belongs inevitably to our human lot; but some relaxation now and then is necessary. A little rest after toil constitutes the supreme bliss of our life. From moments such as these my poems have come to birth. Consequently, they cannot mirror the multiplicity of things…My case rather resembles that of farmers or wood-cutters who find remission from ploughing or from heavy fagots, and, sitting under shady trees by the roadside, hum a ditty or two and forget hard life. So I choose to entitle this collections of my poems “Hours of Leisure”.WANG JINGWEI, translation by Seyuan Shu

Wang Jingwei wrote the above as the Author’s Preface to Xiaoxiuji (A Little Rest), the first part of his poetry collection Shuangzhaolou shicigao. Shackled and chained in the neck, hands and feet, Wang began the collection in prison after the 1910 attempt on the Prince Regent’s life (see Wang Jingwei: His Life, Ideas and Beliefs, p.222). Xiaoxiuji was translated as “Hours of Leisure” by Seyuan Shu in Poems of Wang Ching-wei (London: Allen & Unwin, 1938).

Yet, in Shuangzhaoloushici duhouji (“Reflections After Reading Shuangzhaolou Poetry”) Ho Mang Hang wrote that readers of Xiaoxiuji would not regard these works as leisurely. The poems written in prison reveal a heavy heart for revolution (see Wang Jingwei Poetry - Newly Edited, p.2).

After World War II, more than 30,000 people were imprisoned as hanjian (traitors to the Chinese nation). Among these, many became political prisoners due to their association with the Wang Jingwei regime. As the son-in-law of Wang Jingwei, Ho Mang Hang was sentenced to Tiger Bridge Prison in Nanjing for two-and-a-half years, while Chen Bijun was sent to Suzhou’s Lion’s Mouth Prison  and later transferred to Shanghai’s Tilanqiao Prison.

In Chapter 18, in Cloud, Smoke, Scattered Memories, the Memoir of Ho Mang Hang (p.222), the author recalled that reading was the most effective way to spend his time in prison:

The entire Tiger Bridge Prison was filled with the sound of reading; especially during sunset, when recitation of poetry, chanting of literature old and new, from far and near, poetry, sonnets, essays, permeated the air. While there is nothing special about reading in prison, for a large prison to be occupied by so many intellectuals was likely a first, not to occur again.    HO MANG HANG

Political prisoners whiled away the months and years of incarceration by reading. They also turned to creative writing. Many of their works are now published for the first time in Prison Writings by Members of the Wang Jingwei Regime, which chronicles life behind bars and reveals the literary life and relationships among the prisoners.

Chen Bijun (1891-1959) was imprisoned for fifteen years after the loss of her husband Wang Jingwei. Separated from her family and loved ones, watching her closest associates were sentenced to death, Chen also suffered from many illnesses. She turned to poetry. In addition to copying Wang’s poetry collection and giving them as gifts to friends who had helped her, she also wrote poems of her own. An example is “Missing Fourth Brother” which can be found on page 237, in the book. Chen used “Fourth Brother” as Wang Jingwei’s name.

Prison Writings by Members of the Wang Jingwei Regime also includes the works of literary scholar Long Yusheng (1902-1966), created at the invitation of Chen Bijun, as well as the works of twenty-six others, with seven Ho Mang Hang’s fellow prisoners who dedicated poems of encouragement to him upon his release. Together with private letters, these rare works in this book remained in Ho’s private collection.

According to recent studies, more than 30,000 people were tried as hanjian (enemies of the Chinese nation).* Yet, except for a few recent works by scholars, little is known about this period in history. For this reason, philologist Dr. Liang Jiyong has observed that these writings from prison offer great historical value.

Many similar discoveries can be found by analyzing the original manuscripts and materials in all the books in the Wang Jingwei & Modern China.

*Of the 13,570 who were sentenced and imprisoned, 369 were executed, 979 received life-sentences. By the end of 1947, the number of people sentenced rose to 15,391, while the number prosecuted increased to 30,828. In addition, the Chinese Communist Party also began massive activities to arrest hanjian, increasing these statistics exponentially.

Partnering with Eight Corners Books to Further Our Mission