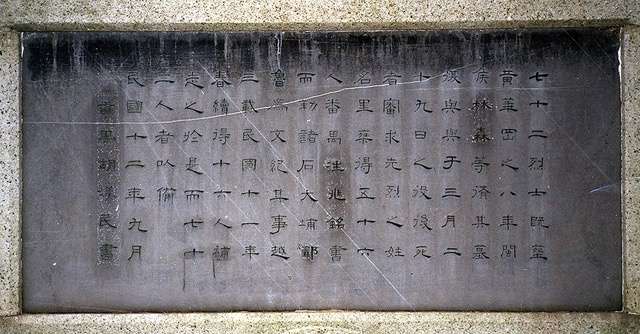 In this inscription, Hu Hanmin (1879-1936) described the Nationalist Government’s work to commemorate the sacrifices of the revolutionaries known as the “72 Martyrs.” It also credits Wang Jingwei for the calligraphy of the names of the martyrs. Photo collected by Ho Mang Hang, dated April 1, 1989. 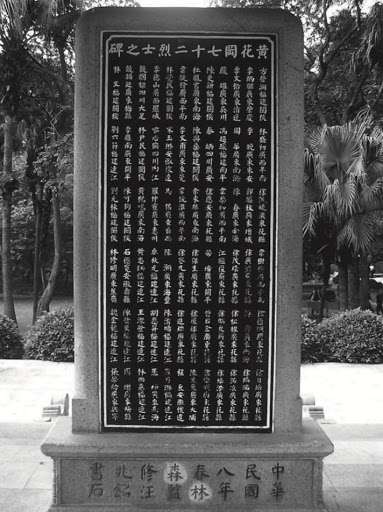 Wang Jingwei’s calligraphy of the names of “72 Martyrs” at Yellow Flower Mound in Guangzhou. Photos courtesy of sinofather.org.

In an attempt to stimulate revolutionary fervor, Wang Jingwei plotted against the Prince Regent Zai Feng’s life in 1910. While the attempt failed and Wang was sent to prison, his revolutionaries continued their efforts to revolt against the Qing, including the April 27, 1911 Yellow Flower Mound Uprising. On this 110th anniversary of this important turning point in modern Chinese history, we take a look at Wang’s relationship to the event, even though he was not present himself.

During the uprising, Wang’s nephew Zhu Zhixin (1885-1920) led the militia and participated in strategic planning. Aside from Wang Jingwei and Huang Fusheng (1883-1948) who were in prison, the remaining members of the 1910 assassination squad Chen Bijun, Fang Junying, Zeng Xing, Li Zhongshi, Yu Peilun (1887-1911) all participated in the uprising, buying and transporting guns and dynamite in Japan, Hong Kong and Guangzhou.

In the end, many revolutionaries sacrificed their lives in the revolt, including Yu Peilun, Fang Junying’s brother Fang Shengdong (1886-1911). The close relationship between the Wang and the Fang families, and Fang’s sacrifices are detailed in a 1962 letter written by Fang Junbi in Wang Jingwei: His Life, Ideas and Beliefs on pages 446-447.

Since Wang Jingwei was in prison at that time, he could only gather pieces of news from prison wards, and turned to poetry to express his sorrow about the loss, (see Wang Jingwei Poetry - Newly Edited, page 12.)

Although the uprising was put down, the resolve for revolution was by then unstoppable. Soon the October 10 Wuchang Uprising followed, which successfully overturned the Qing administration. After the Republic was established in 1912, the National Government found the names of 56 martyrs and asked Wang Jingwei to write them for an inscription of a commemorative stele. In 1922  the names and birthplaces of sixteen others were discovered, which Wang also calligraphed and were added to the stele. This way, the names of all 72 Martyrs can be memorialized to this day.