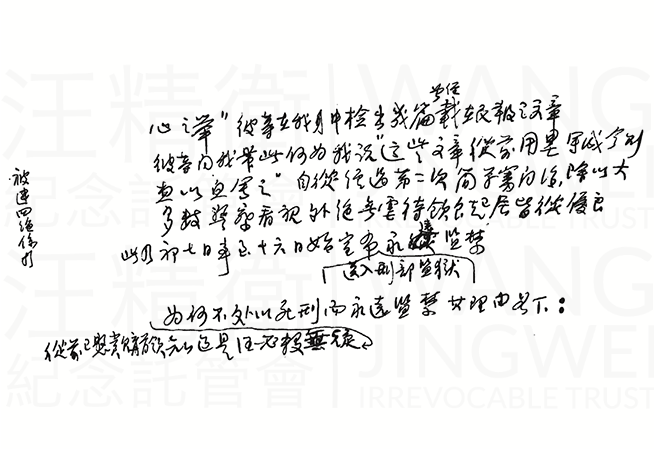 When officials asked Wang Jingwei why his essays “Trend of Revolution,” “Determination for Revolution,” and “A Farewell letter” were sewn into the lining of his coat, he responded: “These essays were first written with ink, now I want to write them in blood.” Page 13 of Wang Jingwei’s draft of an autobiography, in Wang Jingwei: His Life, Ideas and Beliefs (page 218)

While the failed assassination attempt is familiar to many, the draft of an autobiography reproduced in Wang Jingwei: His Life, Ideas and Beliefs (on pages 21-24, 212-224) and Wang Jingwei Nanshe Poetry (on pages 22, 43-44, 60, 78-82, 86-88) present little-known firsthand accounts. They include Wang’s descriptions about his arrest and trials; conversations with officials, prison guards and fellow prisoners; conditions of his imprisonment, what he ate, how he spent his time; observations and analysis of the different classes of prisoners; circumstances of his release, and what he did after leaving prison.

Although Wang Jingwei rose to fame as a national hero, and his poem〈被逮口占〉(see Wang Jingwei Poetry - Newly Edited, p.7) “Impromptu Verses Upon My Arrest” became one of the most recited poems in China at that time, Wang Jingwei’s just-published handwritten manuscripts provide a rare glimpse of prison life during the late Qing period, 110 years ago, through the eyes of a prisoner. They also contribute to a more complete understanding of Wang and his poetry; it was during his time in prison that Wang began writing his poetry collection Shuangzhaolou shicigao, published in Wang Jingwei Poetry - Newly Edited.

Wang Jingwei was imprisoned in Beijing for almost two years, and heard many stories from the prison guards.WANG JINGWEI NANSHE POETRY, page 78