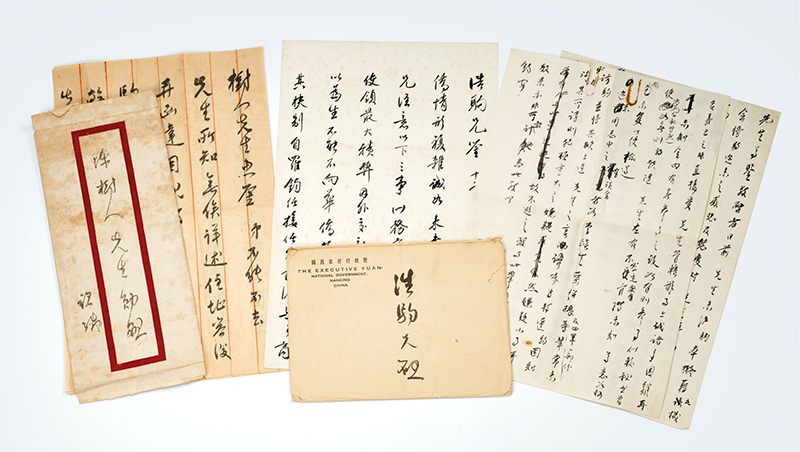 Wang Jingwei: His Life, Ideas and Beliefs features scans of 50 letters handwritten by Wang Jingwei along with full transcriptions, annotations and summaries by Professor Hsu Yuming. Also included are five letters written by Wang’s associates. Many were written with a pen, which are rarely seen. (pp. 353-468)

A primary goal in the publication of Wang Jingwei & Modern China is to further the understanding of the life and ideas of Wang Jingwei using his own words, those of his associates, and factual events. To this end, our books feature thousands of scans of handwritten works along with complete transcriptions.

The volume titled Wang Jingwei: His Life, Ideas and Beliefs features a collection of private letters written by Wang, published for the first time. Here are a few examples:

In this four-page letter dated December 16, 1927, one day before announcing his intention to leave for France, Wang Jingwei appealed to Chen Shuren (1884-1948) to help his associates who remained in China. Wang listed the qualifications of each person in detail, ranging from a secretary to a body guard, in the hopes of securing new positions for them.

This letter written by Wang Jingwei to Li Haoju on June 10 1936 describes his health condition and details of the medical treatments he received in Europe. This is one of ten letters written to Li featured in Wang Jingwei: His Life, Ideas and Beliefs. Other letters to Li include words of encouragement, personnel issues, and his theory on the power struggles within the KMT (Guomindang). Li held several positions under the Wang regime and was the younger brother of Li Lingshuang, Ho Mang Hang’s mother.

Regardless of how devastated I am, the steps to save the country cannot be disrupted.WANG JINGWEI, in letter to Fang Junbi, dated March 25, 1939, five days after Zeng Zhongming’s assassination in Hanoi

Twenty-six letters written by Wang Jingwei to his closest associates Zeng Zhongming (1896-1939), Zeng Xing (1882-1954), Fang Junying (1884-1923) and other members of the Fang family dating from 1910 to 1939 cover a wide range of topics, such as: an intimate declaration of love for his future wife Chen Bijun (1891-1959); observations during his trip to France at the 1919 Paris Peace Conference; information about his medical conditions; an expression of concern for Fang Junbi (1898-1986) after the 1939 assassination of her husband Zeng Zhongming; and discussions of different arrangements to memorialize Zeng. These letters reveal a little known side of Wang Jingwei’s personal life.

Worthy of note also, is the 23-page letter written by Fang Junbi, which chronicles in fine detail the little-known life during the years in France, immediately following the establishment of the Republic in 1912. It is a rare account of the relationships between the Wang and the Fang families, and of Wang’s activities while in France.

Read the letters in Wang Jingwei: His Life, Ideas and Belief for a more complete understanding of Wang the man, not found in other published works.

Many similar discoveries can be found by analyzing the original manuscripts and materials in the Wang Jingwei & Modern China series.