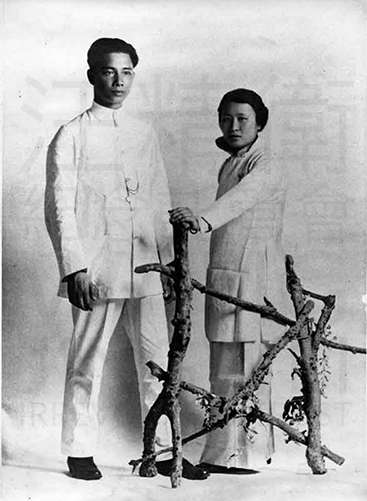 Wang Jingwei & Modern China sheds new light on one of the more popular topics of discussion surrounding Wang Jingwei: his wife Chen Bijun (1891-1959), and the relationship between them.

Wang Jingwei’s poetic expressions of affection for his wife had been published in the Shuangzhaolou shicigao collection, where “Bingru” (Chen Bijun’s courtesy name) appeared no fewer than thirty times. As Ho Mang Hang pointed out in Wang Jingwei Poetry - Newly Edited, at least ten of Wang’s poetry works were dedicated to Chen.

Here we will focus on firsthand materials shared publicly for the first time: personal items created by Wang and Chen themselves for family members and close friends, making a better understanding — rather than speculation — now possible:

When did Wang and Chen meet?

Pages 355-360 of Wang Jingwei: His Life, Ideas and Beliefs show a six-page letter that Wang wrote to his closest friends and allies Zeng Xing (1882-1954) and Fang Junying (1884-1923), written before his attempted assassination on the Prince Regent to stimulate revolutionary fervor. In the letter, dated the 15th day of the 2nd month of 1910 (lunar calendar), Wang gave an intimate and emotional account of his growing feelings for Chen since they first met in the winter of 1907-1908. The letter reveals that Wang and Chen had made a mutual commitment to marriage in 1910, and declared their wish to be married on the eve of his imminent death. (ERRATUM: The date of the letter is mistakenly transcribed as the twelfth month on page 355 in Wang Jingwei: His Life, Ideas and Beliefs.)

When did Wang and Chen marry?

The couple was officially wedded in April 1912 in Shanghai, according to historical accounts; but other than a mention of their wedding date as “a certain day” in April 1912, there are no other details. The event was reported by the Shanghai newspaper Minlibao on May 5, 1912, according to Cai Dejin’s Wang Jingwei sheng ping ji shi, p.22.

With the publication of Wang Jingwei: His Life, Ideas and Beliefs we can confirm that Wang and Chen had considered themselves married on the 17th day of the second month (March 27) in the lunar calendar, 1910. This conclusion is based on a calligraphy scroll of the poem〈二十五年結婚紀念日賦示冰如〉(“For Bingru on our 25th Wedding Anniversary”) that Wang dedicated to Chen Bijun on March 31, 1934. (See page 34.) In the inscription, Wang wrote that the date of the anniversary fell on the 17th day of the second month in the lunar calendar, which coincided with their wedding date twenty-five years earlier.

While there may be no written record of the “official” Shanghai wedding date, it is clear from the calligraphy scrolls that Wang Jingwei and Chen Bijun considered themselves to be already married on the 17th day of the second month (March 27) in the lunar calendar, 1910. Many similar discoveries can be found by analyzing the original manuscripts and materials in Wang Jingwei: His Life, Ideas and Beliefs and the other books in the Wang Jingwei & Modern China series.