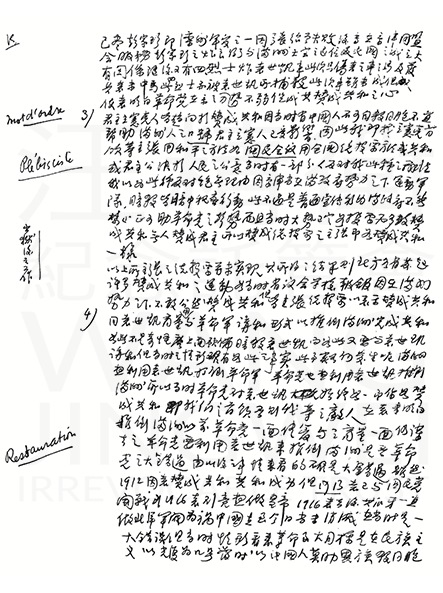 In the draft of his autobiography, Wang Jingwei describes his work after being released from prison for the attempted assassination of the Prince Regent, which centered around plans for a vote to decide on the system of government (see Wang Jingwei: His Life, Ideas and Beliefs, p. 226).

For centuries, voting has been one of the core elements of a democratic society, as well as an indicator of the legitimacy of a government. Even before the founding of the Republic of China, Wang Jingwei had proposed to hold a vote to determine the type of political system China should adopt. This idea of representation through popular vote, which was recorded in the series Wang Jingwei & Modern China, remains an informative read for people today!

According to Wang Jingwei’s autobiography draft (see Wang Jingwei: His Life, Ideas and Beliefs, pp. 202-351), Wang Jingwei was arrested and imprisoned for trying to assassinate the Prince Regent but was released in November 1911. After his release, Wang returned to Beijing and Tianjin, where he set up the Beijing and Tianjin branch of the Tongmenghui (also known as the Chinese United League or Chinese Revolutionary Alliance). At the time, there were only a little more than 100 party members. Wang was elected as chairman of the branch and was responsible for making the plans.

In light of the fact that Beijing and Tianjin were under the power of the Manchurian-led Qing government, besides organizing assassinations and enlisting the Beiyang Army to support the revolution, Wang Jingwei also advocated for more peaceful methods. For example, he argued for holding a national assembly, a general election, and for the form of government to be determined by the general will of the people. He thought:

At the time, it was a foregone conclusion that, should a vote take place, no one would be in favor of a monarchy and the majority would vote for a republic. Therefore, supporting the idea of a general vote was synonymous with being in favor of a republic. WANG JINGWEI

Although a popular vote did not come to fruition under the restrictions of the Qing government, the calls for a republic grew even louder. The northern provinces launched many pro-republic movements. Although provincial assemblies, schools, and newspapers were under the influence of Manchuria at the time and were thus afraid to openly support a republic, they still covertly supported a republic by giving their support for a general election. As a result, the Chinese Revolutionary Party gained momentum.

At the end of May 1925, the Kuomintang (KMT) held a meeting of its Central Committee and resolved to organize a national government and adopt the committee system. On June 28, Wang Jingwei was elected as a member of both the National Government of the Republic of China and the Military Affairs Commission. In a subsequent vote, he was elected Chairman of the Standing Committee and Chairman of the Military Affairs Commission. On July 1, the National Government of the Republic of China was officially established. For details, see Wang Jingwei: His Life, Ideas and Beliefs, pp. 58-61.

Through analyzing the primary documents in the Wang Jingwei & Modern China series such as the draft of Wang’s autobiography on page 124 and corresponding documents, readers will be able to uncover similar new clues and discoveries.