Among the many women who played influential roles in Wang Jingwei’s life, two women who are rarely mentioned deserve particular attention: Wang's mother and his mother-in-law.

Wang’s mother, known only as “Madame Wu” (the record of her full name has not survived) died a few days after Wang’s thirteenth birthday. Even so, the memory of her giving him lessons remained fresh throughout his life. During the 1920s, Wang Jingwei commissioned the painter Wen Youju to create “Morning Lessons in the Autumn Darden,” which depicts Madame Wu instructing as a nine year old. The scene was depicted again during the 1930s by the painter Fang Junbi (Fan Tchunpi), when Wang thought that the Wen Youju painting had been stolen. This became Fang’s first painting made in an overtly Chinese style. In the inscription on the painting, Wang wrote about his mother’s life as steeped in sorrow and worry (see Wang Jingwei: His Life, Ideas and Beliefs, p. 517). Wang also dedicated a poem in 1929 to the memory of his mother giving him lessons in the garden as depicted in the Wen Youju and Fang Junbi paintings (Wang Jingwei Poetry - Newly Edited, p.60).

In 1934, ten years before his death, Wang described memories of his mother as if they were scenes played out right in front of his eyes. (“Autobiographical Sketch,” Oriental Magazine, January 1934) See Wang Jingwei: His Life, Ideas and Beliefs, p. 518. 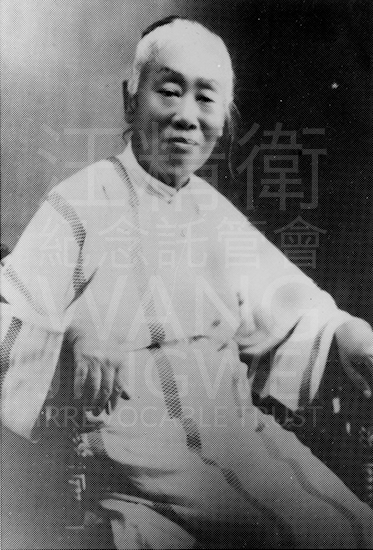 Born in Guangdong, Wei Yuelang (1869-1945) set sail alone for Malaya at the age of 15 to marry Chen Gengquan, whom she had never met. Together, they became the owners of rubber plantations and tin mines throughout Malaya, earning Chen Gengquan the nickname “Millionaire Chen.” Wei bore three sons and a daughter Chen Bijun (1891-1959), who later became Wang Jingwei’s wife.

Known within the family as “Fifth Aunt,” Wei Yuelang not only supported her daughter’s decision to join the Tongmenghui (known as Chinese United League or Chinese Revolutionary Alliance) when she was only seventeen, Wei accompanied Chen Bijun to meet Sun Yatsen in Singapore and joined the revolutionary society herself.

When the Wang Jingwei formed an assassination squad with his comrades to plot against Qing officials with the goal to stimulate public sentiments for the revolution, it was Wei Yuelang who financed the squad’s activities by selling her jewelry. She also donated money in an attempt  to win Wang’s release from prison after his arrest from the failed assassination attempt. (Read  Wang Jingwei: His Life, Ideas and Beliefs, p. 492).

In 1935, Wang wrote the essay “My Mother” in Chen’s name as a tribute to Wei’s understanding, affection and support for the revolution. (Read  Wang Jingwei: His Life, Ideas and Beliefs, p. 520).